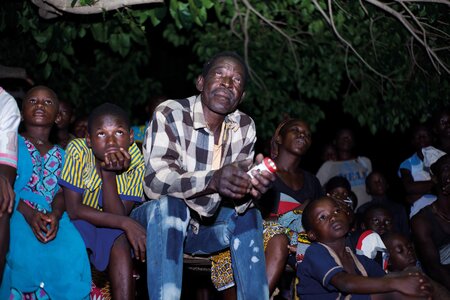 There is much to do and everything changes fast, Duncan explains: “Sharing agronomic information is a very dynamic area. New pests and diseases emerge very quickly, often as a result of climate change. 'Fall armyworm', for example, a moth known to consume vast swathes of crops in South America, was first identified in Nigeria in 2016. It's now a challenge for smallholders growing maize right across Africa.

"The war in Ukraine presents numerous challenges. No export of grain from Ukraine and limited availability of raw materials from Russia for fertilisers will result in shortages and cost-hikes for smallholder farmers. I am currently working with CABI International, and other organisations, to adapt the advice to minimise the impact of these shortages on food production and food security."

Over the years, Duncan has honed seven golden rules for communications campaigns in rural Africa that can make the difference between success and abject failure.

1. Workshop ideas with the relevant people

The days of people from the global north going over to Africa and telling them what to do are thankfully far behind us. Agricultural practices need to be context-specific and practical.

Duncan explains: “Before we can think about communications, we create a technical brief. What are we trying to do? What are the issues? What do we need to get across?"

“Then we refine that with people in-country. That might include researchers, agricultural product specialists or process experts. Farmers' and women’s organisations are usually present, as are wholesalers and other people from the agricultural supply chain. There might be somebody representing the Ministry of Agriculture, local political leaders and even faith leaders.

“We get them all in a room for two days and we thrash out what will really work, from land preparation, ploughing and managing a crop, to harvest and on to market. How are we improving things? What will be new for people? What are the obstacles? Where could it go wrong? At the end, we aim to have a plan that everyone in that room can imagine working.”

“Then crucially, we test the plan with farmers who will influence its success, to ground truth it.”

2. Get creative with communication

Smallholders are notoriously difficult to reach. They often live in remote villages miles from anywhere. They might not be literate. They may not have mains electricity. They may have local traditions, customs and culture that have a really significant bearing on how they work the land.

Duncan says: “Whatever you’re trying to do, the communication you use is absolutely key to success. My background in the UK is in the creative arts, so I’ve brought some of that thinking to projects in Africa.

“In Northern Ghana we wanted to spread the word about how soy can be a really lucrative cash crop alongside traditional maize farming. I employed two young rappers, known as the Choggi Boys, to create songs about soy production.

“Their style builds on traditional African rhythms, so it appeals across generations and is delivered in local languages. The songs have a hook and a catchy tune and cover things like how to prepare the soil, how to test your seed and the correct planting density.

“We get the songs played out on radio, but also send them as mobile phone messages via an existing FarmerLine channel with really good geographic targeting.

“We found these songs got used in entirely different ways, depending on farming tradition. For example, in one part of Northern Ghana, we found the men passed on what they had heard verbally in the village, playing the song to one another on phones and discussing it. But in another area with a different tribal heritage, 10 or 15 women would get together and go field-to-field, singing the chorus to spread the message.”

3.  Involve the best people you can

Duncan says that reaching out to the right people can take a project to another level. “Using local people like the Choggi Boys is a must, but you can also bring in global expertise to help shape what happens.

“Working in Kenya some 10 years ago, I came across a team creating a comic designed to engage young people and encourage them to share positive ideas. Rob Burnet, who set up the comic, was brilliant at pulling in local talent. When he was setting up the studio, he was helped by a UK comic-writing legend, Hunt Emerson.

“The resulting comic, 'Shujazz', which means 'hero' in Swahili, features two boys and two girls and is written in street language, Sheng – a hybrid of Swahili and English. We use Coca Cola lorries to deliver it out to the villages.

“Today, it has a circulation of over one million copies a month, with a readership estimated at over 12 million. There’s now a version in Tanzania too.

“We’ve collected lots of positive stories about how the comics help to change behaviours. One Muslim young girl was able to persuade her father to use different farming practices she had read about in the comic to keep weeds down. This benefited her, because it was her job to do the weeding. In another, a girl set herself up as an advice-giver based on the content in the comics, helping the women in her village to understand the merits of agricultural approaches.”

4.  Use the right language

First off, it’s important to talk in ways that are jargon-free. This is a challenge when the scientists who provide the innovations are only trained to write in scientific journals – rather than speak to farmers.

“In Ghana, there are 137 different languages! These break down into nine core languages that the majority of people can understand. However, all secondary school teaching is in English which means that people who are literate read English – but people who are not, need information in local languages.

“In this instance, we worked with a young social entrepreneur to create films about planting, fertilising and yields. He had tricycles –motorbikes with trailers – equipped with projectors, screens, generators, speakers and nine copies of the films in each of the nine languages.

“The drivers go on tour for about four weeks at a time, arriving in remote villages, setting up an open air film screening and playing loud music to bring people out. Usually pretty much the whole village will attend, which is great because each member of the family will take part-responsibility for remembering the part of the messaging that can benefit them.”

5.  Technology is your friend

In Africa, technological advances have radically changed the connectiveness of remote villages through mobile phone networks.

Duncan says it’s an invaluable channel for communications. “We like to piggyback on existing services. So for example, many telecoms companies run farmer services featuring vital information about weather and market prices. We can feed best practice agricultural messaging into those services, knowing they are regularly accessed and discussed in the villages. These are usually voice messages, but as smart phones become more common, we can also send videos.”

Duncan says that until recently, farmers had dependable weather patterns, which drove the agricultural calendar. With climate uncertainty, timing of agricultural messaging is changing. And this used to be a real headache.

“If you rely on radio you have to book and pay for slots in advance. Early rainfall or drought could render these time slots redundant. Telling someone to plant or harvest at the wrong time isn’t very helpful.

“Today, mobile network messaging can be precise, both in terms of timing and geography. We send at the right time for the right area. Problem solved. In our most recent campaign, we linked phone messages to the farmer information centres in Ghana. These use loud speakers to share information in rural areas. They broadcast at 6 am as farmers are off to the fields. It is a great way to keep everyone informed – but it is a rude awakening if you happen to be staying close to one of the relay points!"

7.  Measure what you can, but focus on making a difference

Finally, Duncan says that everyone wants measurement of impact and results, but this can’t be at the expense of effectiveness.

“Whether it’s a philanthropist or the British Government, investors and donors want to learn from each campaign so they can continually improve and know that they are spending their money wisely.

“The problem is we are dealing with vast areas and remote places. The cost of measurement can be as much as the cost of the campaign itself.

“The question is, do you spend your budget on robust measurement but only reach half as many people? Or do you reach twice as many people and have less information on what you’ve achieved?

“The art is in a compromise somewhere in the middle. I favour workshopping the technical brief so I have real confidence in the approach. Piloting schemes so I can iron out unforeseen issues. And then using sampling to get a picture of the outcomes achieved, without losing huge chunks of money that could have been raising incomes and reducing poverty.

"What really helps is if you have a robust partnership in place where the agro-dealers report back to you on how your campaign has impacted on their sales. This information is free and comes much quicker than any research."