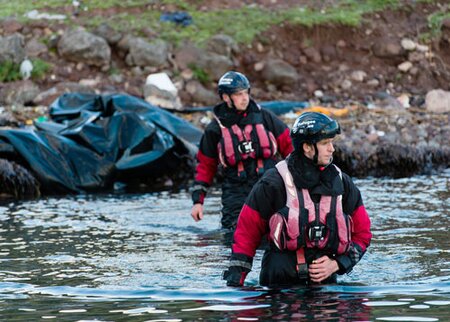 When writer and musician, Joby Fox, saw the television images of refugees drowning as they attempted to cross the Mediterranean in 2015, he felt he had to do something. Over four years later, the charity he created has saved countless lives – and continues to do so.

Like many of us, Joby Fox was horrified by the senseless loss of life he saw reported on TV throughout 2015, when desperate migrants tried to cross the Mediterranean in dilapidated and overloaded boats.

Unlike many of us, Joby, a well-known writer and musician from Belfast, decided to do something.

Together with artist, Jude Bennet, they set up a volunteer force to help refugees safely make land on the shores of Lesvos. This soon became the charity, Refugee Rescue, the only humanitarian and professional search and rescue organisation in the region.

In January 2016, the anonymous donation of a used Atlantic 75 inshore lifeboat, named Mo Chara (which means ‘my friend’ in Irish), put the group on the water. The welcome addition of former ferry skipper, Michael Cecil and other RNLI trained volunteers, transformed their capability.

The crossing to Lesvos from Turkey is only six miles, but it’s a dangerous endeavour when too many people are crowded onto sub-standard boats with useless life jackets and a lack of experienced crew.

Vulnerable people, forced from homes by war and violence, pin their last hopes on smugglers who extort what little funds they have left for a place on these death-traps.

These boats are sometimes solely occupied by migrants, with an inexperienced refugee who may never have been at sea before at the helm. Or they are skippered by smugglers who may drop refugees on inaccessible rocks. Either approach is fraught with danger, as boats drop refugees in rough seas, attempt to come ashore in inappropriate places, or capsize as people try to disembark.

The UN reported over 3000 deaths in attempted Mediterranean crossings in 2017 alone.

Meeting boats as they arrive

From modest beginnings, today Refugee Rescue runs a well-honed operation. Land teams scan the horizon day and night and notify the Mo Chara when a refugee boat is identified. The lifeboat goes out to meet boats and assess their sea-worthiness or advise on where to land.

Refugee Rescue volunteers will then try to orchestrate an orderly transfer from the boat to the shore. They hand over to land crews from other charities and local volunteers who will provide warm clothes, a cup of tea and an equally warm welcome, before they become part of the formal EU refugee arrival system. The charity works closely with the Hellenic Coastguard and other statutory bodies to coordinate activity. They have the only agile lifeboat with trained crew on the North Shore of Lesvos, so are relied upon for tricky extractions from hostile coves and for fast response when people are in the water.

Out of the media spotlight but no less vital

Paul Kerrigan, Vice Chair & Treasurer of Refugee Rescue, says that whilst the media spotlight may have moved on, the need in 2020 is still vital.

“In August, September and October 2019 we helped around 5000 refugees. Even in the winter months, when the weather prevents crossings, we are still looking at helping 400 or 500 people a month.”

Paul says it can be emotionally challenging work. “These are ordinary people from all walks of life: doctors, lawyers, construction workers, teachers, gardeners, cooks; and lots of unaccompanied minors whose families have been killed at home.

“This six-mile crossing can be the culmination of terrifying journeys that began thousands of miles away and took months or even years. To end up fighting for your life just a hundred yards offshore is a terrible thing. Every life we save makes our efforts worthwhile.”

Paul explains that keeping the operation running is a constant battle for finance. “We aim to have four trained crewmembers and two back-up crew available at all times. We also have a land crew of spotters and greeters. At the height of activity, we can have as many as 20 people on the ground at any time. They are all volunteers, but we have to pay for boat maintenance, fuel – which can be upwards of €13,000 a month – flights and accommodation.

“Recently we have been informed by our mechanic that Mo Chara requires new engines at a cost of €20,000. These engines are the heartbeat of our operation and we need to be confident that they are in full working order.”

“What we really need is a large Corporate donor who can help keep us afloat – in every sense of the word. We’d love to hear from one of Bellwood Prestbury’s corporate clients, if they’re looking for a worthy cause to support.”

SUPPORTING REFUGEE RESCUE
Bellwood Prestbury provides protection for the volunteers, with a rolling policy that is easy to update as personnel change. Cover also includes essential indemnities for the charity.