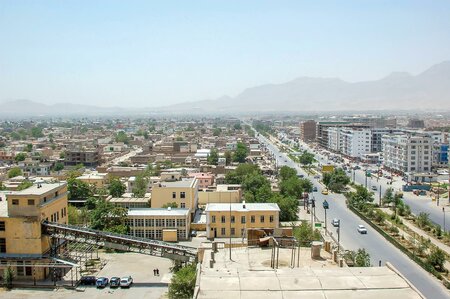 Adrian Henry lived in Kabul for seven years before recently returning home to head up Bellwood Prestbury’s London office. What’s it really like to live there?

“I remember arriving. It was 19th March 2010 and my first thought was: I’ve made a terrible mistake!

“There were guns everywhere. It was a windswept desolate airport. Driving to the accommodation I couldn’t see anything you could insure. It was just rubble and broken roads. I couldn’t envisage where an insurance company would do business.

“Happily, once I got into central Kabul, things changed. There are relatively modern buildings. Lots of rebuilding was evident. I could see that there was a lot of business happening there.

“The turning point for me was visiting a well-known UN compound where there were lots of expats relaxing and discussing business. That made a good platform to start from and became a hub for me over the coming years.

“A surprising thing about Kabul is that it has a kind of Mediterranean climate. It’s located at over 1,750 meters/5,900 feet, so it’s cooler than much of the region. You get a short, sharp winter from December to March or April. May to mid-October, it tends to be late 20’s to 30 degrees, which is pleasant enough. It can get super-hot some days, but it seldom lasts too long.

“Tremors and earthquakes were new to me and I never really got used to them. 2010 was my first time. It felt like I was attached to a jack-hammer. I was in a building that had been designed to ‘give’, but it’s still really unsettling. That happened every year or so. I never got used to the ground moving.

“The security situation does inevitably dominate, but it quickly becomes a part of your routine. I lived in a secure apartment complex and more latterly, in a property located in a residential neighbourhood. Each day would start with a breakfast security briefing. I would then be driven to the office in an armoured land cruiser.

“Visiting clients, working with the Central Bank Governor or Minister of Finance for example, or visiting an evening reception at an embassy, you make sure you get in and out smoothly. The danger is more acute in the transfer from vehicle to building.

Yes you hear and see bombings. Occasionally expat hotels, restaurants or business districts are targeted and you could always be unlucky. Everyone knows someone who has been affected. But I took the necessary precautions and generally really enjoyed my time in Kabul.

“I helped to build some of the insurance infrastructure that is making business easier today for both international companies and domestic Afghan businesses. That’s something I will always be proud of.

“Whilst I’m now safely based in London, I’ve just come back from a trip to Mogadishu in Somali to set up high-risk cover for a number of clients there. I really enjoyed it. I guess it’s in my DNA.”

Adrian Henry is a senior broker for Bellwood Prestbury, based in our London office.