Shining a Light On Mogadishu 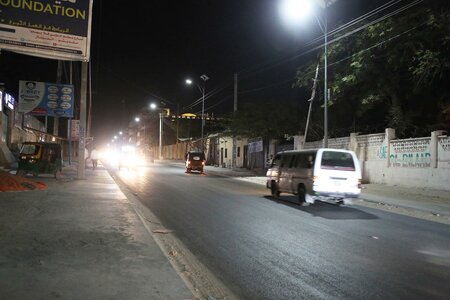 NIS is a Norwegian-based non-profit organisation that supports state-building and reconciliation processes in order to help stabilise conflict and post-conflict environments.

Eric Sevrin, one of the founders, explains that he set up NIS to fill the gap that often exists between emergency relief work and longer-term development projects. For NIS, this represents what they term the “Stabilisation Gap”, when trust-building efforts between communities and weak public institutions are potentially most critical.

Typically, after an area is liberated from conflict there is an immediate need for basic services and the rehabilitation of basic infrastructure. While many NGOs work to provide these things, few work closely with the local governments and attempt to give them a leading role in presenting the projects to the people.

“We believe that a key to long lasting stability is strong institutions which are legitimate in the eyes of the people.”

This demonstration of intent is particularly important in areas where militants have provided some degree of governance and the government must prove it can also deliver something of value.

We believe that a key to long lasting stability is strong institutions which are legitimate in the eyes of the people. In order to move towards this, visible projects that help authorities to quickly build trust are absolutely essential. These projects also need to develop local capacity and encourage community engagement to build a platform for peace and future development.

NIS uses this model in post-conflict regions all over the world, but one of the most illuminating projects has been the installation of solar street lights in Mogadishu, Somalia.

Why are street lights so important?

Eric explains that when they arrived in Mogadishu in late 2011, just a few months after significant areas of the city had been liberated from Al Shabab’s control, the mayor put street lights as one of his top three priorities.

After 20 years of conflict, Mogadishu was a city in almost total darkness after 6pm. When it’s totally dark, people stay at home. The police and peace-keeping forces can’t operate efficiently and security risks are higher. The negative psychological impact of a darkened city adds another layer of complexity that is too often under-appreciated.

We were the first international organisation to take up the challenge of working closely with the city government to install solar street lights and ensure the government was seen as the primary force behind the project, not NIS.

Not only are the solar lights a wonderfully green solution in a city where the sun shines all day, but more importantly, it means you can install each street light independently without the need for large scale power infrastructure or expensive diesel-based electricity grids. You simply put up a pole and add the solar powered light on top and within hours it is already working.

What was it like when the first lights were switched on?

The immediate effect was incredible. I was in Mogadishu when we installed the first poles. The impact on each lighted neighbourhood was profound.

“After so many years, it was striking to see a neighbourhood emerge and flourish”

The positive effects on security allowed for increased economic activity from shops being open longer, as well as new shops opening. It allowed for more socialising and play in the evenings. The lights allowed for the first semblance of normality during the night for many years.

After so many years of civil unrest, it was striking to see a neighbourhood emerge and flourish – and all from something as simple as a street light.

Today, there are 60 kilometres of lit roads in Mogadishu and although the city is far from secure, the authorities now have more trust and control. And while still fragile, I think it’s safe to say that ordinary people have more hope.

What should other organisations thinking about work in Mogadishu consider as a priority?

Although the current situation in Mogadishu is what Eric calls ‘fluid’, there are more and more big infrastructure projects being launched. This is attracting new business providers, contractors and professionals from all over the world.

Eric says, being established on the ground is perhaps the most important first step.

It’s a complex place which is hard to understand from the outside. Our model is to have strong capacity on the ground, which we accomplish through hiring the best national local staff. We’ve been really pleased with the quality and availability of local professionals.

I think it’s essential in a place like Somalia to keep tendering and recruiting processes totally transparent and to have trusted locals on the ground. Rumours of bias or unfair treatment can be a death knell for international organisations and greatly reduce the ability to deliver.

Over the years we have seen the security situation evolve from one of knowing where the frontline was in Mogadishu, to a more asymmetrical conflict characterised by terrorist-style activity using suicide bombers, IEDs and complex attacks. In addition, there is a real risk of kidnapping for westerners.

When we visit from Oslo, we still use armed vehicles with drivers. We are always prepared to postpone trips without question if we get information suggesting there could be a threat. My advice is to always be cautious and listen to trusted sources on the ground.

I tell new people to be prepared for the fact that you won’t be able to have a planned programme. You’ll have a wish list of meetings and objectives, but nothing can be confirmed until the very last minute. Be prepared for cancellations because getting around is difficult and safety comes first.

Does Eric look forward to his trips to Mogadishu?

After six years of flying in and out of Mogadishu, how does Eric feel about his trips now?

I remember the first time I went. It’s a bit strange to hear the Captain say “we’ll be landing in Mogadishu in 10 minutes.” It’s an interesting feeling.

There was a time, a few years ago, when the security situation was much better. We could have a wonderful lunch at restaurants on the beach, though still with some security precautions. Sadly the situation is too risky again right now for these types of outings.

“...even my wife is quite relaxed about it.”

I’ve been so often now, it’s become quite routine; even my wife is relaxed about it. I have good friends there. We enjoy amazing fish. It’s not my thing, but one of my colleagues tells me that the camel liver for breakfast is excellent.

Last time I was there, we were up on a rooftop with a breeze, enjoying a barbeque and I felt totally relaxed. Then I remembered there were armed guards surrounding the place. I guess there’s a little way to go yet!

Eric Sevrin is a Founder and Senior Partner at the Nordic International Support (NIS) Foundation, a Norwegian non-profit founded in 2011 that implements a large range of projects together with donors and key national stakeholders.