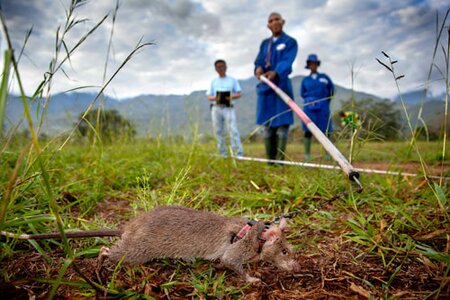 For more than 20 years, APOPO’s scent detection rats have been saving lives by detecting landmines. As a result of these remarkable animals, thousands of people in Angola, Cambodia and Mozambique can now live and work their land in safety.

APOPO’s HeroRATS go through extensive training before they are ever deployed in the field.

Taken out to the training ground in Tanzania early in the morning, the day always begins with a weigh-in and health check to make sure each HeroRAT is healthy and strong and eager to work.

APOPO’s training minefield is 60 acres and has 1500 real, but diffused landmines. The rats are set to work on a lead, systematically searching the ground at a speed humans could only imagine. One HeroRAT can search an area the size of a tennis court in 30 minutes - this would take a manual deminer with a metal detector up to four days (depending on the levels of scrap metal present).

APOPO’s HeroRATs detect only TNT and ignore scrap metal. When they find a landmine they gently scratch the surface of the earth and their trainer gives them a tasty treat as a reward.

It works. Over 20 years, not a single HeroRAT has ever been injured or missed a landmine during operations.

To date APOPO has:

“My name is Luisa Manuel. I am from Quitexe in Angola.

We had to flee our home during the war. When the conflict ended in 2OO2, our family returned to find our house damaged. We were living in constant fear for our lives because we knew there were landmines laid all around the village.

We told the children and tried to keep them inside, but it wasn’t easy - we didn’t feel safe anywhere. The landmines continued to threaten our livelihood and safety as we lived in fear of injury or death. I know two people who ventured off the paths, stepped on landmines and died. I found it very hard to feed my family.

Then APOPO came. I only knew rats as destructive pests and when they ate our crops or dug into food reserves this made me angry. I had never imagined rats could save lives!

Thank you APOPO for removing the landmines and returning safe land back to us. At least now, because of the work that APOPO did here, I have no fear for my family’s safety. Once again, I have hope for the future and my dream for Angola to be cleared of landmines.”

This is Our Land

"My name is Sam Mucaveli. I am a community leader of the Moamba II Locality, near Maputo in Southwest Mozambique.

We knew it was dangerous to go on land contaminated with landmines. But this is our land. It is fertile and we just watched it sit there doing nothing for the last 3O or so years whilst we shared smaller plots that had become over farmed, over-grazed and less productive.

One day my friend crossed unsafe land in order to retrieve a cow that had wandered away. He stepped on a landmine. He lost his leg and became confined to his homestead. Eventually, he died. He left behind a wife and two children.

Over the years this community suffered three deaths and numerous injuries, including to children. More often our animals got killed instead. Our cows and goats are valuable assets and to lose one is a big loss in profit, food, or offspring. I lost four cows myself to landmines.

A year ago APOPO came and prepared the land for rats that could smell the mines. Rats! After the rats found the mines we watched APOPO deminers going out to dispose of them safely. We were all very impressed with their courage.

Now we are back to the land with our cattle and tools. It is a wonderful feeling to work the land and feel safe again. I am just sad that my friend did not live to experience it, but at least his children can."

ADOPT A HeroRAT OR MAKE A CORPORATE DONATION

APOPO is an independent charity, wholly reliant on donations. Why not adopt a HeroRAT, or follow our example, and make a Corporate donation: www.apopo.org/en/adopt