Discovering a New Species of Orangutan in Indonesia 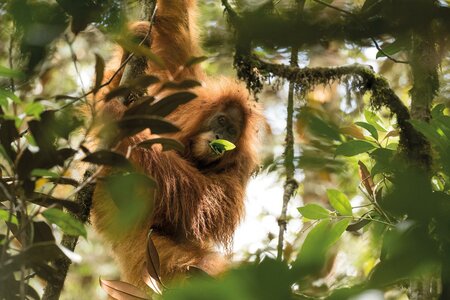 Professor Serge Wich from Liverpool John Moores University has been studying orangutans in Sumatra for over 25 years. Recently he helped to identify a new species.

IN: Why did you choose to specialise in primates?

Prof. Wich: My interest in orangutans began because of their close affinity to humans. To understand our own evolution, I believe it’s important to study great apes.

In particular, I’ve been focused on how they communicate with calls and whether that can inform our understanding of the evolution of human language. I’ve been visiting the remote regions of Indonesia for over 25 years now.

IN: How did your work lead to the discovery of a new species?

Prof. Wich: As a result of work by many colleagues and myself in Sumatra, we were able to combine behavioural studies into the orangutans’ signature calls with genetic and morphology data. This enabled us to show that we had actually discovered a new species, as yet unknown.

IN: That sounds like a really exciting day at the office...

Prof. Wich: There were only six great ape species – not including us. So adding one to that very small list is spectacular and brings it up to seven. It’s something I think many biologists dream of.

Prof. Wich: Yes, very definitely. To study them, we have been mapping how many there are and where they are.

That’s why conservation has become an equally important part of my studies. As a scientist you ask yourself: what we can do to protect these wonderful creatures and their habitat?

IN: Why is there such a steep decline in numbers?

Prof. Wich: Our field studies show that there seems to be two key problems.

The first, as you might expect, is deforestation. It’s not just the volume of forest lost but also the fragmentation caused by palm oil plantations and development.

That means that orangutan populations are cut-off, with a few hundred here and a few hundred there and sometimes a few thousand in yet another forest area. That reduces the gene pool, and makes them more susceptible to local extinction. It also means they are closer to human contact and that is our second big problem.

Hunting. In remote regions of Borneo, local people go hunting for deer and wild boar for food. But if they run into an orangutan, they’ll often kill that too. It’s a large animal so hunters then obtain a feast for many mouths.

At the same time, as farms and palm oil plantations encroach on the forest, they are closer to the orangutans. People who are afraid of them, or are protecting crops, will often kill them. Access for hunters is easier too.

“In my estimation, hunting is a larger threat than deforestation.”

IN: You carry high-risk insurance from Bellwood Prestbury. What are your main concerns on your expeditions?

Prof. Wich: Our work is usually very remote. It could be a couple of days walk from any settlement. Sometimes a satellite phone will still work; sometimes we are totally isolated.

Medical emergency is the main risk. An ugly fall for example, or being hit by a branch from a tree. Animals like snakes can be deadly too. A field assistant working with one of my colleagues in Sumatra was tragically killed recently.

We have seen medical evacuations for people falling or being ill. You need to have insurance that will cover that and liability insurance to cover members of the team.

Having said that we can be in the jungle for weeks or months at a time. My longest trip was nearly a year. When you consider how much time we spend in the forest, problems are rare.

No-one has done all the calculations, but I’m pretty sure that walking the streets of London is much more dangerous than being in a rainforest. It’s just harder to treat people out there.

IN: And I read that you are now using drones in your work?

Prof. Wich: Yes, we used to just rely on pen and paper, returning year after year to estimate forest density and animal numbers by observation from the ground.

Drones can be much more efficient in mapping the changes in habitat and can help us to get into really inaccessible areas.

They can help us to establish animal numbers too. We can identify orangutan nests for example and then compare with ground data to get a more accurate count.

IN: What’s your next trip?

Prof. Wich: My next trip is three weeks to Tanzania. I’m taking a group of masters students to a remote area to teach them drone flying.

I think using drones in combination with automatic image recognition and satellite data – together with ground studies – is the way forward for this kind of work.

Professor Serge Wich is a Professor in Primate Biology at Liverpool John Moores University and a Founding Director of the not-for-profit, ConservationDrones.org