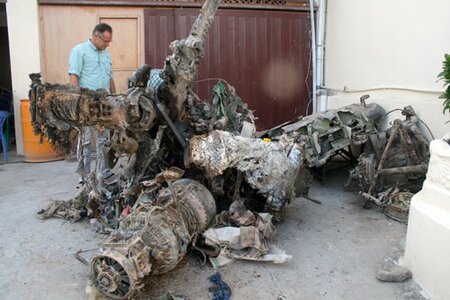 Ridley’s Scott’s epic film, Black Hawk Down, depicted the disastrous US military operation in Mogadishu in 1993, which resulted in the downing of two MH-60L Black Hawk helicopters, Super 6-1, piloted by Cliff Wolcott and Super 6-4, piloted by Michael Durant. A two day urban battle ensued to recover stranded US and UN forces.

Debris from one of the Black Hawk helicopters then sat in Bakara Market for almost 20 years, with constant development around it that eventually just left a small piece of metal sticking out of the ground.

Alisha Ryu, Operations Director at Mogadishu-based Pbi2, explains: “We used to take international visitors to see it – a visual gravesite where people could pay respects. But in 2012, with the economy here on the way up, the whole area was due to be redeveloped as a car park.

“We didn’t feel that it was right that the wreckage that represented the loss of 18 American soldiers, two UN soldiers and hundreds of Somalis should just be bulldozed, so we set out to save it.

“It started as a small operation; just a few of our guys with shovels. Even that required sensitive negotiations, and was highly risky, even for us. As we started to dig we found more and more of the aircraft, including the entire rotor of Super 6 -1.

“In the end, we collected a truck load of debris, which we shipped back to Fort Bragg N. Carolina, where the 160th Special Operations Aviation Regiment, known as the ‘Night Stalkers’ is based. They now display the wreckage in the Airborne & Special Operations Museum, in honour of those who were killed in The Battle of Mogadishu.