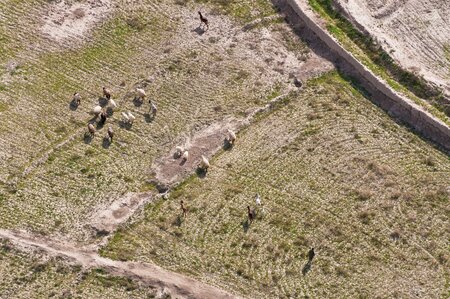 Just over 10 years ago, cashmere expert David Lee was asked to visit Afghanistan to help encourage cashmere farming as an alternative source of income. Today he is delivering a better living for thousands of herdsmen.

David Lee and David Mallin, co-owners of Cashmere Fibres International based in Bradford in the UK, had 30 years’ experience in buying, processing and selling Afghan cashmere when the call for help came.

Initially David Lee was asked by the Afghanistan Sustainable Agriculture Program, part of USAID, to simply raise awareness of cashmere as an alternative living for tribespeople in the countryside.

An alternative to growing poppies and joining the Taliban

David explains: “At that time, it was tough living in the villages. The only ways to make ends meet was to grow poppies or fight for the Taliban. Cashmere farming was a viable third option.”

As part of an educational tour covering Mazar and Kundus in the north, Herat, Farah and Ghor in the west and Kabul and Jalalabad in the east, David was able to encourage the uptake of cashmere farming in lots of regions.

Overcoming the next hurdle

He then realised that there was another key hurdle to overcome:

“Almost all of the cashmere was processed in Europe or China, which meant that any added value was lost to the individual herdsmen – and to Afghanistan, as a country. If we really wanted to help make a sustainable living for these people, they needed to have control over the processing.”

In 2011, David set up Cashmere Fibres Afghanistan (CFA), taking over an old abandoned factory in Herat that had been built by the Russians in the 1980s. Working with international partners and NGOs, he also set about establishing standards for the industry, so that the global trade would accept Afghani processed cashmere.

Today, working with partners, CFA is part of a thriving industry that takes in the whole supply chain, from breeding the right animals in the right areas, to scouring, disinfection, dehairing and shipping. David explains that there have been wide benefits for communities here.

“We directly employ around 40 people in the factory. We work to the highest health and safety standards. We pay them almost double the market rate and provide them with things like death and disability benefits through Bellwood Prestbury, that they would never receive from a local employer.

“On a wider basis, we have seen the volume of cashmere increase by over 50% across the country, which means that we’re indirectly creating employment for thousands – perhaps even tens of thousands of herdsmen and farmers.

“They all get paid well for their cashmere. Because we now have control over the processing, we can ensure quality is higher, so foreign currency earnings are much better, and the people here see much more of the money made.”

A long way to go

So, you might think that David is satisfied with his Afghan Adventure, but he tells us there is a still a long way to go.

“The opportunity in Afghanistan is to complete the chain to include fibre spinning, dyeing, knitting and weaving to create a garment industry. That’s the vision!”

How do you properly protect a business in Afghanistan?

Through Bellwood Prestbury, David has a range of cover to protect his business, his people and himself.

David says: “As well as raising earnings, bringing a level of western benefits and standards is one of the best things we can do for our staff. Hopefully our example can eventually lead to improvements throughout the country.

“If the Afghan economy is to flourish internationally, they must adopt and embrace international standards of quality, health and safety and customer service.”

David Lee, Director at Cashmere Fibres, has spent a lifetime working in the global textiles industry, with a special focus on cashmere.